A coast-to-coast ride brimming with history

This cross country ride is set in a UNESCO World Heritage Site and sees you follow the northernmost boundary of the Roman Empire, shadowing Hadrian’s Wall as it winds its way across the entire breadth of the country. It’s a wonderfully relaxed route featuring many historical sites which will allow you to sample the rich heritage both Cumbria and Northumberland have to offer.

Different route options are available depending on your preferred type of bike. See the tour operators' websites for more information.

One of the oldest and longest narrow-gauge heritage railways in England which steams through the beautiful Lake District National Park and into the mountains, taking in spectacular views along the way.

This historic castle is one of the jewels of the Western Lake District. Set in majestic gardens which accommodate a vast collection of plant life, you can explore the house in all its glory and learn about its haunted past, as well as visiting its fascinating Hawk & Owl Centre.

Standing proud in Cumbria’s capital city, this historic castle has dominated the skyline and withstood countless sieges over the last nine centuries. Explore its rooms, walk its walls, and discover all about its turbulent history.

This Augustinian priory is set in tranquil grounds and which bely its long and fractious history. It remains one of the best-preserved monasteries in Britain and its cloisters and 13th century church are definite highlights.

Step back in time by visiting this ruined fortress, built from rock scavenged from Hadrian’s Wall itself, that protected its owners against Scottish raids for over 400 years before eventually being abandoned in the 18th century.

Set on the longest remaining stretch of Hadrian’s Wall, you can delve into the history of this famous Roman frontier and explore the ruins of the fort itself as well its fabulously preserved gate, turret and milecastle.

This magnificent fort dates back to before Hadrian’s Wall was built and its state-of-the-art museum contains the Vindolanda Tablets, which are the oldest surviving handwritten documents in Britain.

Robert is regarded as one of the greatest engineers of the 19th century and inventor of The Rocket steam train. He shared the house with his father George, another pioneer who is often referred to as ‘the father of railways’.

This is the world's first and only tilting bridge. It’s a must-see landmark, nicknamed The Winking Eye, which links Newcastle to Gateshead over the River Tyne.

Segedunum was built to guard the eastern end of the Wall and is its most excavated fort. The foundations of many buildings and the Wall itself remain, and its large, interactive museum really brings history to life.

One of the finest full-scale Roman reconstructions in the country showcasing some of the most magnificent finds from that time, you can immerse yourself in history as you explore this battlement which once guarded the main sea route to Hadrian’s Wall.

Standing almost four metres high, these historic remains, dating back to AD 130, are among the tallest surviving Roman structures in northern Britain. The earthworks of a fort can also be explored nearby.

If you choose the full-length option, you’ll leave the historic hamlet of Ravenglass and follow the magnificent Solway Coast all the way up to Bowness-on-Solway where the start of the wall can be found.

The route then heads into Carlisle and gently undulates through Warwick Bridge and Lanercost, and you’ll see the wall in all its glory again before the first significant climb comes at Gilsland, marking the boundary between Cumbria and Northumberland.

The road continues to undulate before you reach the famous Roman fort of Vindolanda. Once you’ve explored there, you’ll be greeted by a climb up to Crindledykes, the highest point on the ride, before dropping into Corbridge.

With all the major climbing behind you, you’ll catch a glimpse of Robert Stephenson’s cottage in Wylam before following an old wagonway into Newcastle and past Wallsend, where the end of the wall can be found.

Continuing along the banks of the River Tyne, you’ll reach the North Sea in Tynemouth where you can dip your wheels in the water before crossing over to South Shields and officially ending the route outside the Arbeia Roman Fort. 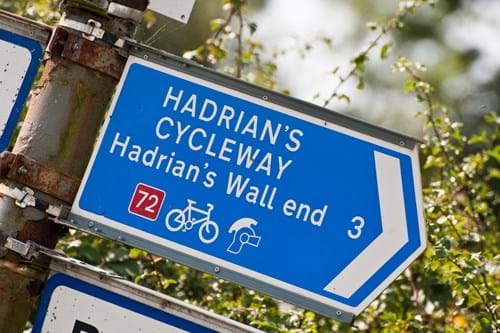 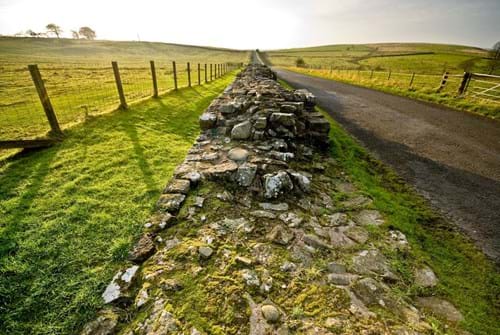 If you're interested in booking this ride as a package holiday option, the following trusted tour operators each offer different variations of it which can be tailored to suit your own specific requirements: