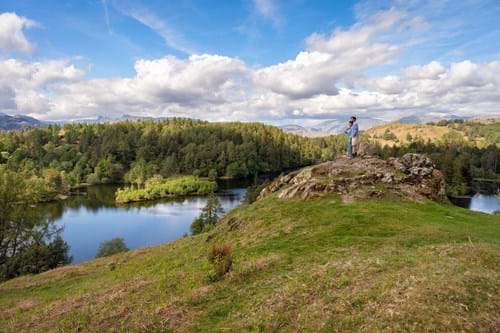 In England’s most north-westerly corner lies Cumbria, a beautiful county which is home to two UNESCO World Heritage sites, three Areas of Outstanding Natural Beauty and over 100 miles of rugged coastline which have attracted outdoors enthusiasts for generations.

The Lake District is one of the jewels in Cumbria’s crown. It’s the largest National Park in England and features breath-taking lakes, soaring mountains and picturesque valleys which marry together perfectly to form a landscape full of adventure.

Hadrian’s Wall is another iconic feature ranking right up there with the greatest destinations in the world. This Roman fortification is one of England’s most historic tourist destinations, stretching the entire width of the country.

Cumbria was made for cycling and not only do our routes offer the chance to become immersed in this incredible scenery, they allow you to discover the area’s rich culture and heritage, sample delicious local cuisine, and relax in a great choice of accommodation.

This classic cycling holiday is a wonderful way to see the varied and beautiful landscapes of northern England, taking you from the Irish Sea in the west to the North Sea in the east, cycling across the spine of the country on quiet country lanes, cycleways and paths.

Hadrian’s Cycleway and the Roman Frontier

This more relaxed coast-to-coast adventure follows the northern boundary of the Roman Empire, starting and finishing at either end of Hadrian’s Wall. It’s a wonderfully tranquil cross-country journey allowing you to sample some of the rich heritage both Cumbria and Northumberland have to offer.

This spectacular loop encompasses some of the lesser-known corners of Cumbria and takes you away from the crowds. It’s a journey through an ever-changing landscape, circling the Lake District with wonderful views of iconic mountain tops, awe-inspiring dales, and crystal-clear waters.

This new coast-to-coast route takes you across the North Pennines on exactly the same route as the Walney to Wear ride until you reach Barnard Castle. From there, you can take a slightly easier direction via Durham to the mouth of the River Wear.

This new coast-to-coast route takes you across the North Pennines on exactly the same route as the Walney to Whitby ride until you reach Barnard Castle. From there, you then traverse the hilly North York Moors on your way to Whitby.

The UK’s network of motorways and other major roads means Cumbria can be easily reached by car.

The M6 motorway travels through the centre of Cumbria – with junction 36 near Kendal, junction 40 at Penrith and junctions 42-44 at Carlisle all accessing the county.

The A66 trunk route is the main way east to west through Cumbria, from Scotch Corner to Workington, passing Brough, Temple Sowerby, Penrith, Keswick, and Cockermouth.

Scheduled coach services run throughout Cumbria and the Lake District. There is a National Express service from London Victoria, via Birmingham and Preston, though Cumbria – Kendal, Windermere, Ambleside, Grasmere, Keswick, Cockermouth, Workington and Whitehaven

There are ferries from Belfast and Dublin to Liverpool, Holyhead and Cairnryan, the Isle of Man to Lancaster (Heysham) and Northern Europe to Newcastle (North Shields) and Hull. Road and rail networks link these ports with Cumbria and the Lake District.

The UK has an excellent railway network. The Lake District, Cumbria, is on the West Coast Mainline and is just 2 hours 45 minutes from London Euston, 2 hours from Glasgow and 1 and a half hours from Manchester.

Alight at Oxenholme and connect with the Lakes Line for Central and Southern Lakes, Penrith for the North Lakes and Carlisle for North Cumbria. Change at Lancaster for connections to Morecambe Bay and the West Coast of Cumbria offering a scenic views of Cumbria’s coastline. Further routes are also available from Newcastle and Lancaster to Carlisle.

The famous Carlisle and Settle Railway serves a variety of stations in Cumbria from its starting station in Leeds.

Cumbria is served by a number of airports with Manchester being the most convenient one for quick access to the Lake District in particular. There is a train service from Manchester International Airport along the West Coast Main line to Oxenholme, Penrith and Carlisle. Newcastle, Glasgow and Liverpool airports are all practical alternatives within easy driving distance.